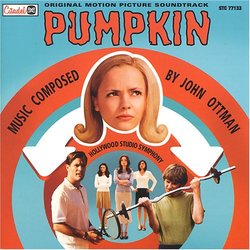 John Ottman is the Pumpkin of the scoring world.  I'm not saying he's retarded or anything like that.  I don't know him well enough to make such a claim.  But Ottman, just like Pumpkin, might appear to the casual observer as the guy who lags behind, the guy who will never make it to the podium, the guy who's always involved in some "special project".  When he doesn't get attached to a big motion picture and see his score either butchered or simply rejected, he is scoring some smaller movie which quickly (unfortunately in some cases, fortunately in others) fades out of everyone's memory.  But the guy has one big, thumping heart.

Pumpkin received a very small release, and the critics who saw the American Zoetrope film either got it or they didn't.  Some called it offensive, while others claimed it was clever and wonderfully done.  Ottman was the third composer brought in on the project, after the previous two bailed due to the strange demands the directors were forcing onto them.  With a brand-new studio fresh out of the boxes, a small break from Bubble Boy scoring duties, and a knack for getting involved in situations that call for frequent caffeine injections and four hours of sleep per night, John Ottman accepted to compose music for a movie the budget of which was so small, the crew couldn't afford a messenger to send Ottman the film.

Adjectives that come to mind when listening to the final product are surreal, tormented, and elegant.  The laughably-small budget of the picture only allowed for an equally-small ensemble of musicians, so the score is played out by 7 violins, 4 violas, 2 celli, a bass, a flute, a clarinet, a piano, and a vocalist, Tassa Hampton.  Ottman adds a number of percussive loops and ethereal synths into the mix, as well as the occasional harpsichord (his trademark) and a sampled trumpet for the last cue.  For such a small group of musicians, the sound on the Citadel Records CD is surprisingly crisp and rich.  Pumpkin is definitely an Ottman score in sound: it has the usual Ottman sensibility and style.  One could describe it as the bastard child of Cruel Intentions and Incognito.  Some of the ostinato techniques he used on Apt Pupil are adapted here, with one particular ostinato serving as a foundation for the whole score, and the music, from beginning to end, is firmly rooted in the baroque, early-Classical period.  Ottman frequently uses the piano for ostinati and the violins and violas carry the melody, while celli and the bass offer chordal support as the clarinet and flute play in counterpoint.  Tassa Hampton's vocals are slightly on the eerie side and are much less emotional than Lisa Donahue's were on Cruel Intentions; then again, they don't play as major a role as they did in the latter film.

An Ottman score would not be an Ottman score without themes and Pumpkin doesn't disappoint.  Carolyn's Theme is Ottman's extrapolation of the sorority song "Sisters of Alpha Omega Pi" used in the film.  It sounds a little bit like Beethoven's Ninth and he uses it quite often as a reflective, pensive theme for the lead character.  Pumpkin, the mentally-retarded boy whom Carolyn (Christina Ricci) is forced to help and with whom she eventually falls in love, has a theme of his own, played delicately and dreamily by the harp and guitar harmonics, until the instruments of the ensemble learn to accept it and flesh it out.  Finally, the Sorority Theme bookends the score in a distinctly baroque fashion, with a driving, energetic string ostinato in triple meter.

Some of the tracks display particular characteristics which might be interesting to mention.  "Bad World" is particularly twisted and utilizes a violin technique (combining col legno, pizzicato, and wood-hitting bow attacks if memory serves) which Ottman frequently uses in his horror scores to create unease.  "I'm Not Retarded" features some electronic work reminiscent of James Newton Howard's piece "Swimming" from Waterworld.  "Friends and Family" brings us back to some of the quieter moments of Ottman's own Halloween: H20 score, while "Destiny" will be a welcomed treat for fans of Cruel Intentions.  I was always disappointed whenever that particular score soared in some cues, with the drum machine kicking in, only to have the whole enterprise fade back to underscore five seconds later.  "Destiny" is the most Cruel Intentions-like, and it soars for a very long time.

Not only does the CD boast amazing music, but the liner notes, as always with Ottman, are generous and informative.  John Ottman is an undeniable master when it comes to character-driven dramas.  He might not get the recognition he deserves, but that does not deny the fact that this score has one great, big, thumping heart.