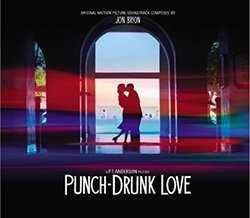 I am not an Adam Sandler fan, which really, for me I guess, is too bad.  I went to college during the years that Sandler was on Saturday Night Live and making his breakthrough movies Happy Gilmore and The Waterboy.  Sure I laughed at "Red-Hooded Sweatshirt" and his other songs (which for my money are still his best material) and chuckled at his film antics, but I never guffawed like many of my college friends.  I never understood the attraction of his manic rages.

So this is the part of the review where I am supposed to reveal how Paul Thomas Anderson's Punch Drunk Love has changed my opinion of Sandler and how now I laugh heartily at his movies.  Not quite, but I can happily report that Sandler has gotten back to his musical-comedy roots.  Sort of.

You know, "sort of" basically describes Punch Drunk Love.  It is sort of a comedy, sort of, a drama, sort of, a commentary on life and love in the 21st Century, and was sort of popular.  Ok, it was not popular at all.  The Sandler on display in the movie is a lonely confused man with a violent temper who calls phone-sex lines for company and smashes his sister's sliding glass door.  He is not your typical leading man in a comedy, romance, or drama.  But if you go see Punch Drunk Love, and I urge you to do so, stick with it.  Although admittedly bizarre, it has a way of touching your heart.

The "sort of" to which I am most drawn in describing the movie is that of movie musical.  Full of bright colors, overblown emotion, and cheesy pop numbers, Punch Drunk Love plays like a musical straight out of the 1950s.  Contributing largely to this feel is the orchestration of composer Jon Brion, the producer behind Aimee Mann, Fiona Apple, and Beck, who also scored Anderson's 1999 film Magnolia.  The score consists of two basic themes, presented in the film's "Overture."  The first is a waltz.  Sweetly sentimental, it first appears on a harmonium, an instrument that has an important plot role.  He then transfers it into sweeping strings right out of any early movie musical.  The second theme is the "He Needs Me" theme.  This gentle love song in four borrowed from Harry Nilsson's Popeye score is finally given full musical treatment, text and all sung by Shelly Duvall, in the eighth cue of the same name.

As a producer, Brion is master of the sample, and he uses that gift to full effect in his score. The waltz theme is taken from the "Overture" and recast in a variety of ensembles.  First it reappears as a French accordion band ala Amelie in the fifth cue "Le Petit Chateau."  Next it morphs into a honky-tonk piano in "Punchy Track Piano" and bad latin muzak in "Healthy Choice," before returning to harmonium and strings for the final few statements in "Third Floor Hallway."  The lilting, weeping sound of this waltz adds to the pathos depicted onscreen and its various permutations perfectly recast the action's locales.

When not focused on his waltz theme, Brion further drives home the notion that Punch Drunk Love is a musical with several songs.  From the desperation of "He Needs Me" and "He Really Needs Me" to the faux-Elvis blues of "Danny (Lonely Blue Boy)" to the musical parenthesis of "Here We Go," sung by the composer, each song captures the nuances of emotion depicted by the actors.  There is even a retro-Hawaiian song "Waikki" thrown in for good measure and their trip to the island state.

As if this plethora of musical inventiveness were not enough, Brion had to include the most inventive cue I have heard this year, "Hands & Feet."  In this one cue, Brion matches the rising anger and frustration of Sandler's character on screen with a cue built of layers upon layers of percussion, both traditional and found.  He begins with a simple computer beep ostinato, so soft that it creeps into your subconscious without your awareness.  He then slowly adds layers of snare and bass drums, timpani, a prepared piano, shakers, and even what appears to be a buzz saw  and a comb in the background.  Just guessing the sounds could take all day, but Brion's ability is such that instead of noticing the individual sounds, you notice the overall effect.

While the intelligence and obvious craft of this score delight me, it is the heart, the sentimental inventiveness of it all that makes me want to listen to it over and over.  Although not your traditional score and therefore not to everyone's tastes, Brion has managed to form one of the five best scores of the year.  The Academy will likely overlook this hidden gem, but let this serve as your official notice.  Take a chance and allow yourself to become lost in the overwhelming eccentricity of it all.  Well, sort of.