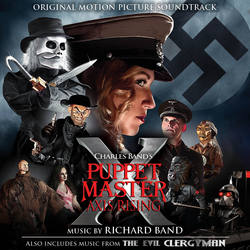 With Puppet Master X: Axis Rising, composer Band unleashes a rich arsenal of militaristic action, thrills and drama—a big musical backdrop for this saga of diminutive warriors. For The Evil Clergyman, Band examines the very nature of our darkest and most lustful impulses.

When a VHS workprint of The Evil Clergyman was discovered a few years ago, Band recorded an amazing score for the short film—a hauntingly beautiful and romantic piece of work that adds a soulful and disturbing dimension to the short's ghastly proceedings.

Produced by Richard Band and Matt Verboys, and mastered by James Nelson, this special release of 2000 units features exclusive, in-depth liner notes by writer Daniel Schweiger (with new interview comments from the composer) and dynamic art design by David C. Fein. A must have for horror/fantasy fans from one of the genre's most celebrated composers.