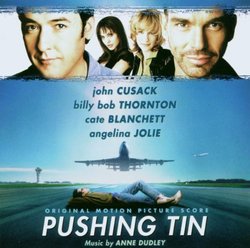 I was biased against this score from the get-go. After The Full Monty took the Oscar from what I thought were four more deserving scores a few years back, I decided that this Anne Dudley woman was someone to be loathed. When I saw that she was to score this film, which I was actually looking forward to, I was very, very bothered. And the ironic part: I never saw the film, but bought the score album with very little reservation.

I had occasion to listen to the CD in-store before buying it, and being impatient, I listened only to bits and pieces of tracks. I fell in love immediately with the theme, which harkens back to the techno-pulse Art of Noise days in Dudley's past. Once I got the CD home, the first track found itself receiving multiple plays. After that, though, it usually stopped, which brings us to the point where this is a good listen, and not a great one.

Aside from a few statements of the theme within the score, it's largely listless ambient noise. Now, I'm a fan of ambiance when it seems to be going somewhere, but this particular brand had me of a mind to say, "just get on with it already." Highlights other than the first track are the beginning of track two ("A Restless Heart"), which features a nice jazzy piano riff executed by Dudley herself, and a lovely Copland-esque string introduction to the score's finale ("Five Miles High"). All in all, though, I find myself listening to only about five of this score’s thirty minutes with any consistency at all.

Don't take that as a bad review: it isn't. It also is not a great review. This is a score with a wonderful theme whose composer wasn't able to carry any real thematic feel into the rest of the score. To be fair, I still have not seen the film, but I'm sure that it would have been possible to do just a little more with this one.