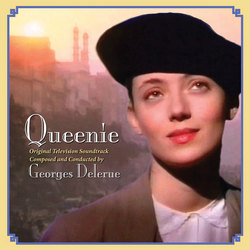 One of the more striking elements of Queenie is its score by Georges Delerue. His musical signatures—the boundless energy, that razor-sharp psychological acuity, and an unsurpassed romantic lyricism, as described by Julie Kirgo in her liner notes— are on lavish display in his score for Queenie, which is instantly recognizable as classic Delerue. The film's setting in India allowed him to introduce some rich new colorings to his music, particularly in the string and percussion departments. Sitars and tablas—or sound-alikes—are significant components of this score, along with bowed string instruments and struck bass.

The score is presented here from the original session masters stored at 20th Century Fox in pristine condition, primarily in stereo with a few tracks taken from the 3-track split mono elements mixed by Mike Matessino so that they blend seamlessly into the stereo program. The album also includes an alternate main title that serves as an overture to the album.