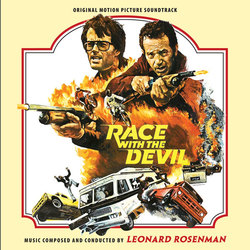 Race with the Devil / Making Love

From the vaults of 20th Century Fox comes a double header featuring two scores by composer Leonard Rosenman. The first is the 1975 thriller Race with the Devil, where two couples accidentally witness a ritual sacrifice when camping in their RV and find their lives threatened by an ever-widening Satanic conspiracy. Although sparingly scored, Rosenman suffuses every scene with supernatural dread. As with other scores from the period, including his two Planet of the Apes entries, Rosenman omits the violin section. However, he makes extensive use of solo electric violin played through a ring modulator, giving the score an otherworldly, diabolical quality, playing off the great tradition of the "fiddling devil." For years, the elements were damaged and unusable, but advances in technology have allowed Mike Matessino to perform a miraculous restoration of original split-track elements (and the mono music stems for tracks 20–23) and for Intrada to finally present this 70s Leonard Rosenman gem.

In a complete about face, the lyrical score for 1982's Making Love provides a sweeter, more poignant listen. The film centers on one Zack Elliot—a seemingly happily married, successful doctor—who finds himself on a journey of self-discovery, which ends with his coming out. Rosenman responded by fashioning a monothematic score built around a long-lined melody written in rondo form. It underscores the purity of the characters' emotional drives and Zack's thought processes and internal uncertainty, as though the theme is figuring itself out simultaneously with the character. After scoring was completed, Rosenman returned to write and record a handful of revised cues, all appearing here in the Extras section.