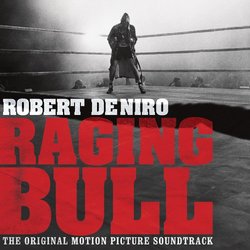 For many, Raging Bull is Martin Scorsese's masterpiece. It is not only considered one of the great films of the 1980's but only of the all-time best movies ever made. This biographical film tells the story of Jake La Motta, the one-time middle-weight boxing champion of the world. Vicious inside and outside of the ring, La Motta punished those closest to him the most of all with paranoia and random violence.

Like many of Scorsese's other movies (Mean Streets, GoodFellas, Casino), this film is filled with "needle drops." Outside of his obvious brilliance with the camera and actors, one of Martin's boldest ideas was to make the score of his films be the eclectic mix of records and albums of the world these characters inhabit. This musical approach has influenced almost every filmmaker after him who has approached the underworld of American crime (Quentin Tarentino, Paul Thomas Anderson, Michael Mann, Ted Demme, and on and on and on).

Scorsese movies often have too much music to include on a standard soundtrack release. Even when a double album is created, there's still music left over. This two-disc edition seeks to buck that trend.

Having reviewed the song album for The Aviator a few months ago, it is not surprising that I saw a few of the same artists show up in both films, though they were made twenty four years apart. Artie Shaw and his Orchestra are here ("Frenesi") as are the Ink Spots ("Whispering Grass"). Even for people who aren't a fan of Big Band and Jazz, there are a few tracks that should strike you immediately familiar, ("Two O'Clock Jump" and "Big Noise from Winnetka"). Plenty of well know 50's classics are peppered throughout: Louis Prima "Just a Gigolo/ I Ain't Got Nobody", Frank Sinatra "Come Fly With Me", Tony Bennett ("Blue Velvet") and Bing Crosby ("One More Chance"). There's also my all-time favorite version of "Mona Lisa", Nat King Cole's delicate and soothing version.

Scorsese saw a violent poetry in boxing that had been unseen previously. He wisely used "Cavalleria Rusticana: Intermezzo" as the unofficial theme of the movie. It's is hard to associate the music with another other than a hooded La Motta jumping around ready for action in a black and white ring. The Period of the 50's and 60's was when Latin and Italian music made an impact on popular music, as represented by Renato Carosone's "Scapricciatiella", Orazio Strano's "Turi Giuliano" and Patricio Teixeira's "Nao Tenho Lagrimas". The album even rounds out with memorable audio from the film, such as Robert De Niro performing as the aging La Motta in "That's Entertainment".

This is a consummate collection of a classic movie and recommended without any qualifiers. I wish something equally impressive for some of his other classics (a Goodfellas two-disc would be amazing).