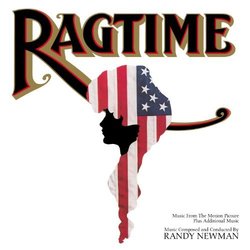 How exciting!  For years, soundtrack fans have been clamoring for a CD release of Randy Newman's Academy Award nominated score to Ragtime.  Finally, after all those years, that release has come.  Milos Forman's 1981 film version of E.L. Doctorow's acclaimed novel received eight Oscar nominations, but failed to win a single trophy.  Newman himself lost out to Chariots of Fire and Arthur (he also got a song nomination).  And thus began the long streak of nominations that would never pay off, until this past year's win for Best Song.   But nonetheless, his score has finally arrived on CD.  Was it really worth the wait?

Starting with the "Main Title", a solo violin and piano start to play out a plaintive tune, and then are joined in by strings and accordion.  It's simple yet so purely evocative of the turn of the 20th Century - and it's a distinctively "Randy Newman" theme, when you think about it compared to his repertoire.  "Newsreel" consists of solo piano playing a secondary theme, almost hesitantly at first, then with confidence.  The cues range from soft drama ("Coalhouse and Sarah", "Denouement") to upbeat and festive ("Lower East Side", "Delmonico Polka", "Atlantic City").  Also included are some cues of a jovial nature: "Waltz for Evelyn", "Clef Club No. 1", and "Clef Club No. 2".

But not to be forgotten, as this is a Randy Newman soundtrack, are the songs: "Change Your Way", and the Oscar-nominated "One More Hour" (which uses the main theme from the film).  The period song "If I Could Love A Million Girls" is also included on the album, but Newman didn't write it. All of these are enjoyable, and add to the enjoyment of the album.  After the final statement of the main theme, "Ragtime", we're treated to a bonus piano demo of Newman's theme. It's the only new track on the album, and while I would have liked to have more music released on the album, the 37-minute CD is still an enjoyable listen.

The liner notes are rather detailed and informative - the history of the film and score is pretty much laid out for you to read.  But the highlight has to be the new forward by Randy Newman himself.  His charm and humor is so pervasive that I couldn't help but laugh when reading it.  Ragtime deserves a place on everyone's CD rack, and I can only hope that Newman revisits his older scores, as he did with this one, in the future.