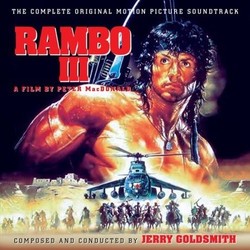 Ahh, Rambo III… Such a guilty pleasure - a nostalgic trip to childhood when I used to run around shirtless with a bandana around my head armed with a Nerf bow & arrow (wait, that was three days ago….). Like most childhood favorites, sadly, this movie sucks. Even worse, several sequences within the final film were tracked with Goldsmith's Rambo: First Blood Part II score. Right or wrong, listening to this album one can understand the mentality for making such a decision.

The album opens with "Another Time" which is a soft rendition of the "Home Coming" theme from First Blood. Just from hearing the solo trumpet playing with the sorrowful strings, we know this is going to be a more "personal" Rambo movie (if there's even such a thing). It seems that the powers that be felt the music was a little to sentimental for John Rambo. Thankfully, Intrada was able to get their hands on the digital session masters of the complete score.

Rambo III concludes Jerry Goldsmith's First Blood Trilogy. For his last entrée, Goldsmith composed an all new theme comprised of a four note motif. This memorable theme is woven throughout the score, but it is most prominent and driving in "Flaming Village" and "Night Fight", two amazingly adrenalin packed cues. While listening to this motif, I am reminded of Goldsmith's theme for The Last Castle. In contrast to the jungle setting in Rambo, Part III takes place in Afghanistan and Goldsmith associates Rambo's new environment with a new theme which can be heard in "Afghanistan" and "Questions"- giving the score a bit of a Middle-eastern feeling.

As mentioned before, the album is arguably a little slower than the first two scores. Action junkies need not worry though! Once the album gets to "The Game" (which opens with a very cool variation of the new action theme), the familiar action rhythms from the other scores kick into full gear. Also throughout the album, hints of Goldsmith's clever synth devices from Rambo can be heard ("Night Entry", "The Long Climb", etc.) This is my personal favorite Rambo score. It compliments the first two Rambo scores by utilizing the same rhythmic scales, but at the same time, Jerry Goldsmith came up with something fresh and new in its complexity. The album ends with "I'll Stay" in which all new thematic material is reprised and Goldsmith also conducts the First Blood theme one last time.

This album contains all of the previous material on Intrada's 1989 release, but the sound quality on this re-release is astounding. The new digital re-master is almost as if someone sprayed the crusty old tracks with Windex and wiped all the dirt away leaving a crystal clear sound. In addition, we get new artwork and liner notes. If you own the '89 release, I suggest you replace it with this one. So pop this disc in your CD player, grab a Nerf bow & arrow and go to war!!