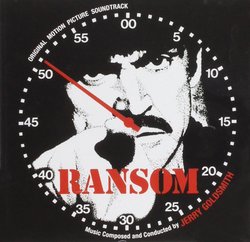 Have you noticed that since Jerry Goldsmith\'s death almost two years ago, we seem to be living in a golden age of Goldsmith recordings? Many of the composer\'s scores that were available only on badly mixed releases (or not at all on CD) have been re-mastered and re-released. It seems like only yesterday we were bemoaning how many of his great scores were forgotten, languishing in oblivion. Today, we have various retrospectives popping up and almost too many releases to count.

Unfortunately, this headlong rush to make all Goldsmith available again means that an occasional bad score is going to come out. Ransom, while not a horrible score, is certainly not up to the level of The Omen, which was released in the same year. The movie itself is partly to blame, as Ransom is not one of Sean Connery\'s better roles. With its tale of a hijacked plane and one man\'s mission to save it, it is unlikely that the movie would even be made today (the movie\'s alternate title is The Terrorists). But the score is not even up to the level of Hollow Man, where Goldsmith took an equally questionable movie and crafted an interesting score.

To be fair, Goldsmith\'s score is one of the movie\'s highlights and Prometheus\'s release is a significant improvement over the old 1991 CD. The sound is clean and crisp and has a good amount of depth, although it still comes across as a fairly cold sound. But what of the music, you might ask? That is actually where my main complaint rests; there just isn\'t much music to this score. The CD opens with the "Main Title," and for the first half minute, we hear a slowly unwinding melody in the brass over steady, quarter-note pulses in the percussion. Fairly standard for an action score. But then, Goldsmith makes a sharp left turn and we get a beautiful, tender melody in the oboe over pizzicato strings. It is a gorgeous piece of scoring, but is strangely out of place in an action movie. By the time the melody moves into the strings, we are in the lush landscape of an epic romance.

Things aren\'t clarified in the second cue, "Standard Issue," which with its trap set, flugelhorn, and electric piano sounds like 1960s lounge music. It isn\'t until "Queen\'s Messenger" that we get a real action cue, full of brass and percussion hits. But this is just a teaser for the best cue of the score, "Sky Chaser." In this cue, Goldsmith lets us know what he was thinking by creating a lush, romantic main theme – by delaying the action, he injected another level of tension to the thriller by thwarting our expectations. "Sky Chaser" opens frenetically, but just a few moments into it the main theme enters, but it has been transformed by a new setting. The melody is still as tender and lush as ever, but he puts it over a relentless ostinato that gives it momentum. The theme returns time and again throughout the cue, but always in a new setting, now over brass and percussion hits, then transformed by its placement in the brass. In between these recurrences, Goldsmith backs off with quietly pulsing piano or strings, always ratcheting up the tension before the next explosion of the main theme. "Sky Chaser" shows Goldsmith\'s penchant for long-range planning of his scores, a penchant that pays large dividends for his audience.

Unfortunately, after this planning and forethought, most of the rest of the score is a simple rehashing of earlier cues. "No Alternative," "No Alternative (Reprise)," and the "End Credits" are nothing more than restatements of the main theme. "Just Sit Tight" is a restatement of "Queen\'s Messenger" so close to the original cue that the timings are exactly the same. After the excitement "Sky Chaser" generates, the rest of the score falls short.

Still, Goldsmith does provide two interesting themes and a small course in how to construct an interesting main theme for a standard issue thriller. It\'s just too bad he didn\'t have a better movie to work with.