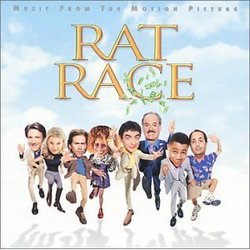 For his return to the film after six years, director Jerry Zucker (Ghost, First Knight) decide to tackle the caper comedy.  In a film that is clearly inspired by It's A Mad, Mad, Mad, Mad World, Rat Race brought together an ensemble cast with one goal in mind: make us laugh.  The plot is simple: a rich casino owner (John Cleese) sends eight lucky people on a race to Silver Springs, New Mexico to win $2,000,000.  Of course, nothing goes right for the contestants, and the jokes start coming left and right.  While not as clever or memorable as It's a Mad, Mad, Mad, Mad World, this film did make me laugh - definitely a plus.  The film also boasted a rather upbeat collection of songs that perfectly fit whatever zany situation the characters found themselves in.

Beginning with the stylized opening title sequence, Baha Men's title song "Rat Race" is an upbeat reggae tune that will certainly put you in the right mind-set for this film.  It's light, it's fun, and it's a head-bopper.  Of course, some cues are used just for gags.  Songs like "You Sexy Thing" by Hot Chocolate, "I Can't Help Myself (Sugar Pie, Honey Bunch)" by The Four Tops, and "Who Let the Dogs Out" by Baha Men are used primarily to play off a joke.

Aretha Franklin's "Chain of Fools" is symbolic at best, and fits nicely into the framework of the storyline and the ludicrous characters we're following.  Colony's new single, "Happy" is also included here, but felt tacked on - the lyrics didn't really have anything to do (symbolically or otherwise) with the storyline, and the inclusion of the song on the album (let alone the film) seems like it might have been part of a package deal.  Also somewhat cliché is the inclusion of Smash Mouth's "All Star".  This time, though, it actually has something to do with the film - in fact, Smash Mouth appears (and performs this special "Exclusive Film Recording" version) in the film, and features quite heavily into the ending of the film.  An ending, I would like to point out, that I found completely ruined the film I had been watching until that point.  It felt hollow, tacked on, out-of-place, and completely inappropriate given the characters we'd been watching for the past ninety minutes.  Oh well.  It's a good performance, but I felt I'd been listening to that song all summer.  (Didn't it get enough playtime with Shrek?)

Towards the end of the album is a seven-minute score suite by composer John Powell. Powell came in rather late on the project, replacing the original composer.  Powell's score might have been churned out quickly, but that didn't diminish the effectiveness and zaniness of the score.  It's up-tempo, light, and when the madness stars to kick in (i.e. the race begins), it has a zippiness to it that is completely enjoyable.  Toss in a bit of choir, and you're done!  I am certainly looking forward to the score album coming out next month.

Concluding the album is a reprise track of "Rat Race", again by Baha Men.  But this is the "Choir Version" - basically the same song, but with a full chorus singing it.  It's novel, and as enjoyable as the original performance.  But wait, there's more!  A hidden bonus track, "America Rocks" resides at the end of the album.  Written by Senator Orrin Hatch (I'm not kidding folks, look it up!) and Utah resident Janice Kapp Perry, the song plays like one of those 1980s inspirational anthems, replete with rock guitar and children's choir.  With lyrics such as "It's totally cool, it's totally hot / I mean it's like right there at the top /America rocks! America rocks! America rocks!", how can you not be proud of the USA?  I know it was done seriously, and it's definitely an enjoyable song, but it almost comes across as campy.  If you didn't know any better, you'd think this was a classic Zucker joke.  Between the score suite, the title song and this bonus track, this album is a must have.