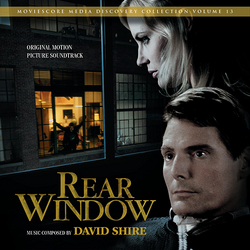 David Shire's Primetime Emmy nominated music for the 1998 television version of Rear Window is our 13th release in our Discovery Collection.

David Shire provided a number of brilliant themes for the main characters. Jason's theme was inspired by Baroque fugues as the counterpoints represent the hero's attempt to rebuild his nervous system. The film's main villain is represented by a distant metallic hit, a choice related to the man's profession (he's a sculptor working with metals). The third key theme for "the other woman" (a character who replaces the murdered wife) is represented by the EWI, an electric wind instrument featuring a deliberately fake representation of a saxophone.