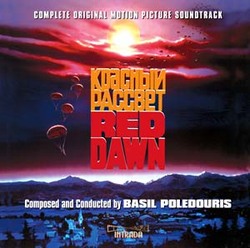 Last fall, longtime film composer Basil Poledouris passed away. It had been a few years since we had heard a new Poledouris score and a few more years since Poledouris\'s glory days, so those who did not follow film scores in the 1980s through the mid-1990s would be forgiven for wondering what the fuss was over this composer\'s death. But for those of us who were interested in the genre during that period, Poledouris was a towering name. Poledouris drew upon his Greek Orthodox upbringing to combine choral textures with a sweeping symphonic sound interlaced with synths to define the mid-80s testosterone-laden action film. Don\'t believe me? Just consider that Poledouris established his name with Conan the Barbarian (1982) and followed it up with movies like Iron Eagle (1986), RoboCop (1987), and my favorite among his scores, The Hunt for Red October (1990). Although he was by no means confined to this genre (he followed 1997\'s Starship Troopers with 1998\'s Les Miserables), his most recognized scores are in this style.

Poledouris\'s Red Dawn was perhaps the most iconic of these scores at the time of its release both because of its music and the controversy that surrounded the movie. Crafted by Conan director John Milius, Red Dawn is an ode to Cold War Era hysteria that follows the exploits of a group of Colorado teenagers who escape a Soviet attack that results in most of Middle America being occupied by the Soviet Union. The students become guerilla fighters against the occupation, inspiring the populace to eventually fight back and win the war. Although the movie\'s political situation is dated today, it was considered intense enough in 1984 to be granted the first PG-13 rating.

Poledouris\'s score also has a historical distinction: it was fledgling Intrada\'s first album when they moved from being a record shop to a record label. So it is fitting that the label honor the composer this year by remastering the score, adding over thirty minutes of music, and releasing it to a new generation.

Milius must have wanted to top Conan\'s lush textures because Poledouris achieves a depth of sound almost unequaled in his oeuvre. In addition to the orchestra, which features almost ninety players, he layers in synths in that distinctive, Vangelis-like sound. For instance, in the "Main Title," Poledouris begins with high string harmonics before the keyboards kick in with a pulsating rhythmic ostinato. When the melody enters, it is accompanied by string chords and the strange synth chimes that were extremely popular at the time. The sound is so distinctive you can almost see the men running in slow motion on the beach. Thankfully the violin and then trumpet take over with an elegiac melody and the synths begin to act as support, simply mimicking the melodic lines of the acoustic instruments.

The score vacillates between those two sounds, as though Poledouris was giving the Soviet invaders a deliberately alien, harsh, fabricated sound and the American teenagers the warm, human sounds of acoustic instruments. This distinction is even more evident in this new expanded release because the sound quality has been dramatically improved, making the synths sound colder and the acoustic instruments deeper. He also differentiated between the two groups harmonically. The Soviets were written in a deliberately nontonal, almost twelve-tone language. A few years after writing the score, Poledouris was asked about the film\'s harmonic language in a Soundtrack interview and he remarked that there were few moments you could say, "Oh yes, that\'s the tonality, this is the key we\'re in now." While he is technically correct, the twelve-tone writing is triadically based so it doesn\'t strike the ears as odd. Also, there are a few moments of Soviet tonality, most notably in the quotations of the Soviet Nation Anthem in "The Funeral," a usage that points to his later appropriations in The Hunt for Red October. But most of the Soviet cues are similar to the haunting "Dead Tanks." This cue, which is an easily overlooked quiet gem in a sea of bombast, highlights Poledouris\'s ear for timbre and is disquieting by never settling down in a clear key.

But for the "Wolverines," the freedom fighters, Poledouris wrote cues like "Toni\'s Death; Toni\'s Last Grenade." The Cue begins with delicate harp plucks supported by high string chords and brass chords that are placed in the score\'s sonic background so they seem to float behind the harp. The use of synths is almost like an arabesque, gracing the acoustic instruments with new timbres. Their use is never obvious, even when halfway through the cue the music turns more martial.

Intrada\'s new release is welcome for fans of Poledouris\'s macho scores and Red Dawn in particular. It adds new cues like the aforementioned one for Toni\'s death and a rejected end credit sequence that is more mournful at the beginning, contributing a layer of ironic uncertainty to the film\'s conclusion. But overall, I found the score to be as dated in sound as the movie is in subject. The release is beautifully done, cleanly remastered, lovely to hear, and a nice tribute, but there are better scores if you want to hear Poledouris at his peak.