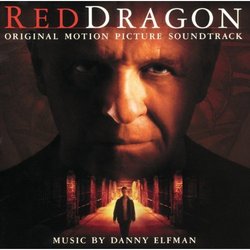 Writer Thomas Harris first introduced the world to Hannibal Lecter, M.D. in Red Dragon.  Although Red Dragon was first converted to film in 1986 (Manhunter), the success of Silence of the Lambs and the somewhat less effective Hannibal made it irresistible to give Anthony Hopkins' Hannibal a third bite at the apple (or liver, as the case may be).

Danny Elfman is in top form here.  At times invoking his own Batman (and Batman Returns) and at times summoning the spirit of Bernard Herrmann (especially Vertigo and Psycho), Elfman adds not just mood to the film, but power.  The score is at its strongest when Elfman thrusts it forward boldly, as he does with dark panache by moving step-by-step from apprehensive ("Logos") to chillingly frantic ("The Revelation"), to culminate in a sheer and sinister Herrmann-esque frenzy ("Main Titles"), all in just the first three tracks!  The same themes are used again to satisfying effect later in the score ("End Credits Suite").  Some of the score even reminds us of his Edward Scissorhands.

The only real downside to the album is that due to the nature of the film, the score sometimes tends to hop-and-scotch between incidental background and lashing thematics (e.g., "The Old Mansion" and "Devouring the Dragon").  This provides Elfman with several opportunities to weave earlier themes into later tracks ("Tiger Balls"), but it can be distracting during the listening experience.  I would have preferred it if Elfman had made the entire album as audacious as the opening tracks, but c'est la vie.

On the whole, if I were you, I would buy Red Dragon just to listen to ("Main Titles") and ("End Credits Suite") over and over again.  Of course, if you do that enough your family might start to worry, so consider headphones.  For now, I'm leaving work to pop this disc into my car, drive home in the dark while it pounds through the speakers, and when I get home I'm sleeping with the lights on...