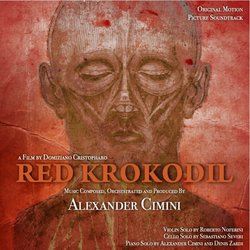 The music by Alexander Cimini is dreamy and melancholic, it's nightmarish, yet emanating hope and longing, a trip through the feelings of "Him" (as the main character is referred to), his reality and visions, his crumbling world and self. Cimini transports us though the psyche and the visuals of the film with his beautiful and inspired music. The CD also features the piece "Capuccetto6" by composer Gabriele Verdinelli.