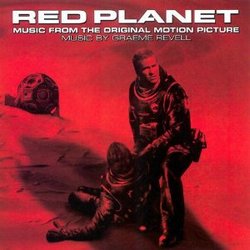 Most projects come in twos. There were two volcano movies (Dante's Peak, Volcano), two World War II movies (Saving Private Ryan, The Thin Red Line) and now two Mars movies: Mission to Mars and Red Planet. The former had an abysmal box office performance so it will be interesting to see how Red Planet fares. While the former had an emotionally moving score (that didn't quite fit in the film) by Ennio Morricone, Red Planet touts an electronic/orchestral hybrid score by Graeme Revell, including songs by Peter Gabriel, Sting, and William Orbit.

Beginning with "The Tower That Ate People" by Peter Gabriel, the album gets off to a rather loud and abrasive start. Once you get over the initial harshness of the electronics, this is a pretty good song by Gabriel that has a good rhythm and catchy groove. There is a "remix" track later on the album, but it doesn't do much other than make it more "danceable". The second cue, "The Inferno" is part of Revell's score as performed by Revell and famed French opera soloist Emma Shapplin. Her debut album, Carmine Meo features singing in 14th Century Italian with a male chorus singing in Latin. At it's core, Revell's score is an atmospheric electronic score. Shapplin lends her smooth voice to the music, and the result is a powerful and ethereal score that is quite enjoyable.

The tracks that Revell wrote that don't include Shapplin still work within the grand flow of the album. A choir triumphantly accompanies an orchestra and electronics in "Mars Red Planet" and a harsh percussive track adds tension (as he did in Titan A.E. and Pitch Black) to "Crash Landing". The only orchestral cue, "Alone" is a rather quiet and calm piece of music that honestly feels a bit out of place given the rest of the album, which is filled with electronic music.

"MontokPoint" is a 1995 piece by Strange Cargo, which consisted of famed electronic composers William Orbit, Rico Conning, and Joe Frank. It's very repetitive, and moves slowly - but it does have many evolutions and the piece we end with is quite different than the piece we started with, seven minutes earlier. "A Thousand Years" is a 1999 song by Sting, and I'm sure it has some reason for being on the album - but the film hasn't been released as of this writing. The final track is a remix of "When The World Is Running Down (You Can't Go Wrong)" by Different Gear vs. The Police. It's a nice remix of the classic song by "The Police", and is definitely one you can dance to now (which is what it was created for to begin with. Again, where it fits into the film, I have no idea.

The album runs about 56-minutes long, and is released on Pangaea Records. While some of the songs seem a bit out of place (other than if it were a "music inspired by" album), there is still almost 30-minutes of original music by Graeme Revell, and those cues are worth the price of the album. I really hope that Emma Shapplin lends her talent to more films scores in the near future, as her voice is simply golden.