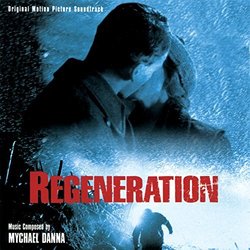 by James Barry May 10, 2003
4 / 5 Stars
Many soundtrack aficionados believe that as we approach the end of the millennium, film scores are lacking much in the way of originality. These purists argue that we have no composer today to match the status of Korngold, or Steiner, or Herrmann, or Waxman. Being a fan of modern film music, I disagree with this grim outlook wholeheartedly. There's still plenty of originality in the world of film scoring, and these days when someone asks me to direct them to it, often the first direction I point them in is northward - to Canada, and to Mychael Danna.

Whatever you think of his work as it pertains to your own musical taste, it can hardly be argued that Danna is one of the most consistently original composers working in the film realm. Witness the films of Atom Egoyan (most notably, his early-music score to The Sweet Hereafter), or Joel Schumacher's 8MM, or his haunting score to Ang Lee's The Ice Storm - some of the most unique film music in years. And though it does not include Danna's usual blend of ethnic instruments, minimalism, and electronics with western orchestra, Regeneration is nonetheless a haunting and beautiful score.

Scored for orchestra and solo voice (with occasional organ), Regeneration is the Danna score least representative of his usual style, and arguably the most accessible. The volume never rises above a low roar, the tempo rarely reaches allegro, and lush, romantic orchestrations are the rule - in many ways, this score is reminiscent of the works of Alan Hovhaness, one of this century's greatest American composers.

The score's main theme can be heard in most of the score cues, and seems to almost foreshadow Zimmer's war epic, The Thin Red Line. The secondary theme (heard in "Dottyville," "Toy Boats," and "Damn You, Sassoon!") has the feel of an English folk song, and I find it rather delightful. The score cues on the album are short, for the most part, and contain "filler" music far more interesting than the norm. A notable example of a wonderful cameo theme (as it were) is "Even as Love," with its lyrical flute solo over slightly uneasy chord progressions in the strings.

Along with the score cues on the disc are readings of selected poems by the film's protagonists, Siegfried Sassoon and Wilfred Owen. If you're in it for the music alone, rest assured that these can easily be programmed out, save for "The Parable of the Old Man and the Young"—which I think is quite an effective prelude to the score's finale. All in all, not typical of Mychael Danna, except in that it serves as a strong argument against those who say there's no good music being written for film today.