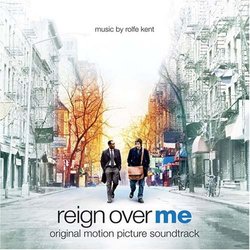 Review: Reign Over Me

A few years ago, I was asked to review music from Sideways, a film I was just beginning to hear about from the reviewers I read. I looked at the composer\'s name, Rolfe Kent, and scratched my head. It didn\'t seem familiar, so I Googled him: Nurse Betty, Election, Legally Blonde. I had enjoyed these films, so I agreed to review the score.

I received the score as the thrill of Christmas was beginning to fade into the cold expanse of an Illinois January. I settled down to listen, paying more attention to the snow drifting outside, but as the music began a strange thing happened. I found my mind drifting to images of sun-dappled hills falling into the ocean, of light summer days where worries are far away. Kent\'s score absolutely transported me. I reviewed the score on the strength of my surprise, but over the next few months, Sideways remained on my playlist. I\'ve come to appreciate it more each time I listen.

I was eager to review his score to Wedding Crashers two years ago, but found that Kent had failed to recapture the strength of Sideways; Wedding Crashers worked decently through most of the film, but faltered towards the end and failed to live outside its confines. But now, with Reign Over Me, Kent has returned to form in a movie that is nothing less than the anti-Sideways.

Reign Over Me is one of the first films to use September 11th as a catalyst for a fictional story. Charlie Fineman (Adam Sandler), is a dentist who lost his wife and daughters in the World Trade Center. Since the tragedy, Fineman has shut down and shut himself off from the world, and the movie follows the attempts made by his friend from dental school, Alan Johnson (Don Cheadle), to bring him healing and hope. Unfortunately, the story lapses into melodrama and lacks forward momentum.

I call Kent\'s Reign Over Me the anti-Sideways because where the earlier score was up-tempo, bright, and flowing, this most recent effort is elegiac. Yet both contain the same 1960s jazz score feel with a small combo playing most of the cues. What Kent has added to Reign Over Me\'s palate is a steady background of synthesized chords. These hovering, floating chords are so pervasive that they recede from conscious listening but add an ominous weight to each cue. They must represent the dull pain of the tragedy for Fineman, an ever-present fog from which he cannot see his way clear. On top of this bed, Kent has layered a few transparent melodic lines played by charangos (South American lute-like instruments), guitars, and piano. Each main character, Charlie, Alan, and Remar, get their own theme, each reflecting their emotional state. Charlie\'s melody is slow, largely characterized by stepwise motion, and circles through the same pitches, never really going anywhere. Remar\'s theme, since she exists outside Charlie\'s world, is played without the background synth chords and moves around the spectrum from low to high and back again. Alan\'s melody is the most interesting. When it first appears, it acts like Remar\'s in being outside Charlie\'s world; there are no synth chords. But by the short cue "Alan Opens Up," the melody takes on characteristics of Charlie by moving slowly and being supported by synth chords. But even at that point it contains something we haven\'t heard in Charlie\'s theme - the chords are largely major, the melody is in the piano\'s upper register, and it constantly moves up. In other words, it contains hope. That cue is a turning point in the score and a moving minute and a half.

Kent\'s great gift in this score is his timbral control. He mixes sound colors beautifully, even allowing in moments of spoken voice that are so fleeting and subdued that they become another musical instrument. Unfortunately, this wash of color also keeps the listener at a distance. You listen to the great sounds, admire what he has accomplished, but are not always invested in the music. Kent tries through his timbres to convey a mood of pain, of loss, of sadness, but you end up admiring their beauty instead of letting them penetrate you.

Still, Reign Over Me is a beautiful score and as relaxing as Sideways was invigorating. Perhaps if he were scoring a movie of more dramatic depth the score would have a greater weight. But as it is, Reign Over Me remains a solid work, even if you admire it from a distance.