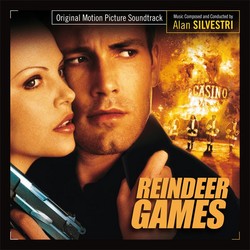 The icily humorous score is packed with rhythmic orchestral suspense and electronic minimalism. Alan Silvestri composes the thrilling tension and chase cues with his signature propulsive action music, while also offering soaring, lush melody as "Nick" quickly discovers that Ashley certainly isn't the sweetheart he imagined her to be.

The soundtrack debut of Reindeer Games is presented in stereo from pristine-condition from digital scoring session mixes, featuring exclusive liner notes by writer Daniel Schweiger and new comments by Alan Silvestri on his collaboration with director John Frankenheimer.