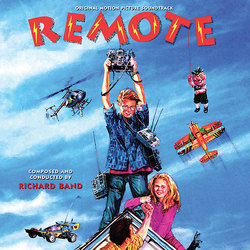 For the second Moonbeam production, 1993's Remote, composer Richard Band blended his new style of orchestra and electronics to create a whimsical, light-hearted adventure score. The main title was animated to Band's music, setting the tone for the score to follow. It combines a bright, propulsive sense of adventure with strings conveying child-like innocence while crisp brass counterpoints with rambunctious comedy. Band invests Remote with a near-constant sense of motion, especially given the comic stalking of its playthings. In a way, it's a PG-subversion of the composer's Puppet Master soundtracks As Band notes further about his style on these films:
"The model I had created in scoring Prehysteria! most assuredly continued with Remote...it was around this time that music budgets were being significantly cut, but as in Prehysteria! I still managed to get just enough money to afford a respectable violin section as well as a small brass section and a woodwind or two. This method of combining real players with sampled instruments was becoming a necessity and one of my signatures as well."

Taking a page from Home Alone, here, the nerdy, precocious kid who's home alone runs away to a model-home residence to escape the wrath of his mom, who's none too pleased to hear he's been expelled because of his gadgets' classroom antics. From the viewpoint of his attic hiding place, Randy watches a trio of bumbling crooks use the seemingly empty place as a hideout. Soon enough, their noggins and limbs are getting rent asunder as Randy unleashes his mechanical friends on these three stooges, with planes, cars and a yodeling mountain climber serving up a rude eviction notice through a series of comically painful pratfalls.