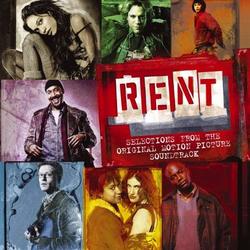 It\'s very difficult to beat an original Broadway cast. They get the very best from the beginning. An actor from a touring cast may play the part in a new way that will gain fans of that interpretation, and he will of course have a great voice, but "better" remains a matter of preference. Rent is certainly no exception to this and assembled an extraordinary cast from day one; it is to the benefit of this film version that all but two of the original members (major characters) returned on screen almost ten years after its stage opening in 1996.

Adam Pascal as Roger, Anthony Rapp as Mark, Wilson Jermaine Heredia as Angel, Jesse L. Martin as Collins, Taye Diggs as Benny, and Idina Menzel as Maureen are all original and resume their characters from ten years ago effortlessly. Pascal\'s Roger stands out as the tormented, tragic protagonist with a power and emotional depth to his voice that brings his character to life. Martin has a great strong, deep voice, and Idina Menzel\'s voice is amazing as always, though after Wicked, this seems a relatively small role for her as she makes her first appearance in the last song of Act One. The cast\'s weakness is that it didn\'t get 100% of the original members back. I have no problem with Rosario Dawson, who replaced Daphne Rubin-Vega as Mimi, I think she\'s a good actress and, though she\'s not quite Broadway caliber, her voice is better than I expected. But the sweet, melodic style Dawson gives Mimi doesn\'t fit: Mimi is a Bohemian drug addict and dancer who struggles to eat and stay warm. Dawson misses the emotional edge that Pascal finds here, even though they sound good together.

Musically, the Rent score takes a generally upbeat rock style, which supports the energy and difficulties of the characters; it just wouldn\'t work with the Boston Pops backing them up. Though there are some great solo songs like "One Song Glory" and ensemble pieces like "Seasons of Love", parts of this musical are sung by a few characters in conversation together. Personally, I have always found conversations put to music in shows like this irritating. Songs like "Light My Candle", which is a dialogue between Roger and Mimi, don\'t build well because the lines go back and forth so quickly. However, that being said, Rent does an excellent job with this kind of lyrics. Two later dialogues between Roger and Mimi, "Another Day" and "I Should Tell You", work very well and manage to go somewhere emotionally and musically. Another technique I like to hear in Broadway music is the recurrence of melodies (other than reprises): themes or motifs that are part of early songs that return in a different way later, and altered lyrics that are sometimes woven together; Andrew Lloyd Webber\'s Phantom of the Opera does this very well. Rent uses this technique to an extent: motifs from "Season\'s of Love" and "Light My Candle" appear in other songs, "I Should Tell You" and the refrain including "No day but today" return in the finales. With so many characters and different songs and storylines, it helps give the story a musical coherence and unity.

Lyrically, after ten years, Rent is just as poignant and relevant as it was at its Pulitzer and Tony Award winning debut. It tackles large problems within American society, but it doesn\'t come across as a blatant commentary.  This is because it focuses on the characters at such an individual level that what they are saying seems real rather than a lament about a larger problem. In "One Song Glory", Roger doesn\'t sing about how he is sick with AIDS and is going to die a young man – he says the word "virus" once, nothing more – but rather sings about his goal to write one song about love that will ring true and bring him glory. It is clear that he is concerned about his predicament – "One song to leave behind", "Before the sun sets", "One song to redeem this empty life" – but his lament is indirect and personal. And once the lyrics have created these characters, it uses them to bring tension to the story: in "I Should Tell You", Roger and Mimi sing a duet trying to say they love each other. But underneath, Roger has to tell her that he has AIDS, which is very important if she is going to love him. But neither love nor his illness is ever spoken of in the song; it relies on what the audience knows of the characters already.

This recording sounds really good on album, which is the advantage of a studio recording for a film. The band and vocals are all very clear and well-mixed, though there are just a few places where the band seems to slightly overpower the vocals. The down side of this album is that after ten years, there isn\'t really anything new. None of the actors seem to have brought their ten years of experience in to re-explore the characters or music. A friend once told me that he saw a reunion performance of The Phantom of the Opera, and Michael Crawford hit and held notes in different ways for a performance that he felt blew the original away. There are small differences in this from the first, but nothing remarkable. It\'s the same with the band. To continue with The Phantom of the Opera, the most recent Broadway show to be put on screen, Andrew Lloyd Webber reorchestrated many of the cues for the movie, which added a new depth to the music and filled out the sound; Rent doesn\'t do that. Like Webber, Larson wrote a song in 1993 before he wrote Rent ("Love Heals") that now appears at the end of the score; like Webber, it\'s a nice song, but ultimately doesn\'t add much to the music.

Overall, Rent fans will be pleased with the score because so many of the cast members are back, but the album really isn\'t worth the money if you already have the original cast (unless you\'re a true diehard Rent fan). Even though it has a better sound to the recording, the album does leave out some of the tracks from the Broadway show. For newcomers to Rent or fans who have yet to buy an album, it\'s almost a toss-up. The original has all of the music (except the one new song) and the full original cast, but if you don\'t mind missing some of the less-pivotal tracks, don\'t mind Rosario Dawson\'s Mimi, and like the studio recording, maybe this soundtrack is for you.