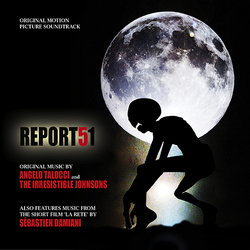 Most of the score is provided by veteran Italian composer Angelo Talocci, whose original contributions for the film have been collected together into the epic suite which plays as a sort of programmatic concert piece for the alien invasion. The other pieces on the album were licensed from the composer's catalogue and were used as source and trailer music for promotion.

Talocci received the Global Music Award in 2013 for Report 51. The soundtrack also includes the song "Brushed Hearts," written by Emiliano Manzillo and Dirk Harzé, performed by The Irresistible Johnsons who also contributed the instrumental intro music for the film (also available in an alternate version).

The album also features music from Alessio Liguori's previous film entitled La rete. The music by French composer Sébastien Damiani is characterized by strings-and-electronica based aural suspense (most notably in "Cellar") while the tense tale of revenge is capped off by a creepy lullaby. It's interesting to note that the director and the composer never met during the production of the score, so the close-knit relationship between the sound design and the extra long takes is all the more remarkable.