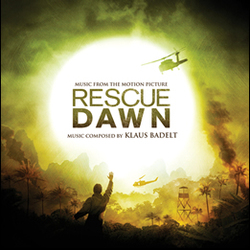 War films don\'t really have a general style when it comes to their scores, given the number of war films that have come out especially in the past decade, and the variety of composers that have written these scores. While none, I believe, use the heavy and fast-paced style of action films - a score like Powell\'s The Bourne Ultimatum behind Black Hawk Down would give audiences communal heart attacks - there is still a broad spectrum of approaches. Zimmer\'s The Thin Red Line is quiet and subtle, while Williams\' Saving Private Ryan (of the same year) is more melodic; Zimmer\'s Black Hawk Down uses ethnic instrumentation and vocals to capture the location, and Rabin\'s The Great Raid uses a full, sweeping orchestra, while Glennie-Smith\'s We Were Soldiers uses both. Klaus Badelt\'s score for Rescue Dawn draws from several of these varied approaches.

Badelt\'s career in American film music began writing additional music for Hans Zimmer\'s scores - The Thin Red Line, Gladiator - until his first full American score, The Time Machine, in 2002. But for a composer formerly of Zimmer\'s Media Ventures/Remote Control Productions, Badelt\'s scores often avoid the generic "Media Ventures" sound (synthesized percussion, for example), though this could be because by the time Badelt was brought on board, Zimmer was himself moving away from this. The Time Machine uses some of the best French horn and oboe solos I\'ve heard in film music and mixes in ethnic vocals (and some electronic percussion) by the end; K-19: The Widowmaker has the feel of a classical symphony, and is actually laid out on album in movements; the orchestrations for Ned Kelly focus on the strings and weave in a slight Celtic sound.

Again with Rescue Dawn, Badelt maintains his interest in the classical symphony and, though it doesn\'t structure into movements, the sound is fully orchestral. Given Badelt\'s background, this style isn\'t as far a cry as The Great Raid was for Trevor Rabin (after Con Air, Armageddon, The Deep Blue Sea), but to my ear it feels almost too gentle for a war film, subtle in some ways in the vein of The Thin Red Line.

Rather than volume or pace or instrumentation, scores like The Thin Red Line ("Journey to the Line"), Barber\'s "Adagio For Strings" from Platoon, and parts of We Were Soldiers use tone and chord progressions to create tension (the volume turns up a little); Rescue Dawn isn\'t quite this nuanced. Instead, to move the score when it needs to pick up, Badelt uses a technique that James Newton Howard has used well in Blood Diamond and The Interpreter: adding a light (occasionally heavy) percussion rhythm behind the melodies to drive them. As a whole, Rescue Dawn is a string and piano based score, often soloistic - piano and cello - and usually with a string orchestra behind.

The first track, "Dieter\'s Theme," opens with a solo piano, which blends into the strings, and the tone of this track carries throughout most of the score. "Journey" is a quiet track, and the third, "Hope," is one that uses rhythm to drive the music forward, beginning with the percussion followed by string chords, which build together. "Sign This" features the solo cello, and much of the album continues these four styles: piano, quiet strings, rhythm, and cello. The first track that departs from these styles is track 9, "Operation Rescue Dawn," which begins with the percussion-driven string melody, but then builds with heavier percussion and faster rhythms (staccato quintuplets). "Keep Your Head Down" combines the solo piano and cello. The album reaches a kind of climax with track 15, "Rescue": it begins with piano and strings, which build into a powerful rendition of Dieter\'s theme, with a touch of French horn behind it, probably the only use of brass in the score. By the end of the track, a soaring string line picks the theme up again.

Though the album is only 48 minutes long, it could almost do without the last three tracks. Track 16 is a song called "Lights" with vocals by James Carrington, 17 is a short reprise of "Dieter\'s Theme," and 18 has lyrics that are spoken by Werner Herzog. They aren\'t bad, per se, and may work in the film, but after the score built up to "Rescue" and maintained the coherence of style and theme so well, these last three detract from this effect. Rescue Dawn is a beautiful score, quiet even for a war film, with a few moments that capture the tension.