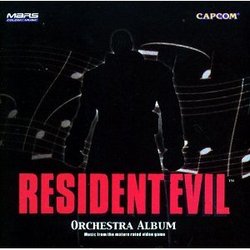 When it was released in 1996, "Resident Evil" scared millions of console game players with its creepy Night of the Living Dead-inspired storyline.  With frightening creatures as your foes, the game went on to spawn a few sequels - each time pushing the bounds of game play and creepiness.  Adding to all of the chills was a creepy and frightening score by Japanese composer Masami Ueda.  Of course, the music was mostly synthesized, as this was a computer game.  But recently an album of orchestral music was released, and it allows us to hear in shocking detail the complexity and intricacies of Ueda's horror scores for the first three "Resident Evil" games.

The only cue from the first "Resident Evil" is a slow building organ solo that sets the tone.  But when we hit the first "Resident Evil 2" cue, all hell breaks loose - literally.  With a pounding timpani and suspenseful strings, the cue starts off slow and ominous, but quickly works its way info a full-bore horror action cue.  The orchestra simply doesn't hold back - with a triumphant brass fanfare, and pounding percussion, it reminds me of a cross between Stargate and Scream.  Go figure!  But the album is not all horror - "Peace of Mind" and "A Secure Place" are a bit more dramatic and softer, with the later ending in a triumphant flourish.

A nine-and-a-half minute suite, "The Ultimate Bio-Weapon" takes us though the "Resident Evil 2" story.  The "T-Virus" mutates animals and turns humans into flesh-eating zombies.  Sounds exciting, eh?  Well, the music is just as powerful.  With multiple themes and complex orchestration, I keep forgetting that this was written for a computer game!  It's truly big-screen material.

Another set of cues from "Resident Evil 3" round out the album.  These are darker in tone, but don't feel like they're really horror cues - just creepy dramatic action cues.  A bonus "Special End Title" track is included at the end, and is an interesting cue that starts with a softer, tense orchestra, and then builds into a rock band jamming for a few minutes - only to be joined with the orchestra for the big finale.  It's certainly unique and somewhat bizarre, but it does end the album on a big note.  Since there are no movies to go see, and this is really an orchestral concept album more than a "soundtrack" to the "Resident Evil" games (they do have regular game-music releases, by the way), don't feel reluctant to get the album if you aren't familiar with the games.  For action and horror, this album delivers.