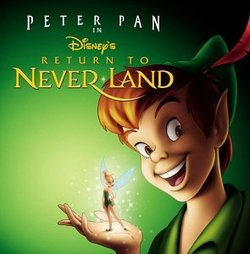 When listening to this score, it's simply a Return to Never Land.  Composer Joel McNeely shines bright in this sequel to the animated classic Peter Pan.  This score is just simply a touch of magic.  Having never seen the film, the music - along with the track titles - were all I had to guide me through Pan's new adventure.  There aren't any "Superman-like" themes that you'll be humming after the first listen, but there are a few fun melodies that caught my ear after a couple listens.

The soundtrack opens with the rather lame song, "Do you Believe in Magic" by BBMAK followed by the "Main Title".  This track transports you back to Never Land with magical melodies and an instrumental hint of the classic "Following the Leader" song from the first picture; definitely a highlight.  The soundtrack also includes a few original songs that aren't as original and memorable as the original classic.

McNeely has also created a nice action score as well.  "Jane is Kidnapped" is highly energetic and also introduces a dark "Pirate" theme.  It's great music to drive to!  Another noteworthy track is "Summoning the Octopus / Pan Saves Jane.  It begins with a familiar "Tick-Tock" tune ala the infamous crocodile, which I guess in this sequel is replaced by an octopus.  Or so it would seem based on the track listing.  This track then bursts into a super cool action/fanfare piece that surely kicks major butt.  "Flight Through Never Land", Track 10, is a wonderful cue that makes you feel like you're soaring over a fake-looking Never Land, like Robin Williams in Hook.

In terms of memorable themes, Return to Never Land is no Hook but it's still a fun listen and shouldn't be passed by.  The only real grudges I have with this album are the rather lame "original" songs, but Joel McNeely's score fits like a glove for this magical adventure.  He has extraordinary talent and Hollywood needs to use him more.