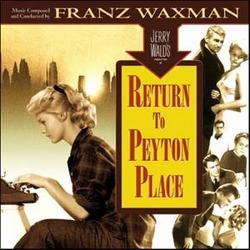 2006 marks the 100th birthday of one of the greatest composers to ever write for film—Franz Waxman. In 1961 Twentieth Century-Fox released Return to Peyton Place, the sequel to the motion picture that inspired one of the most beautiful scores ever written for a film. Though virtually none of the original cast returned for the sequel, Waxman did.

What a joy it is to hear the composer revisit some of his loveliest melodies and further explore them in an all-new score. Also featured in the film was the vocal arrangement of the main theme that became such an enormous hit, "The Wonderful Season of Love," performed by Rosemary Clooney.

Finally, 45 years after the film's release, Franz Waxman's Return to Peyton Place receives its own premiere release. This CD is truly a celebration of a great composer.