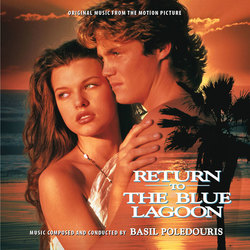 Return to the Blue Lagoon

For the 1991 Columbia film Return to the Blue Lagoon, composer Basil Poledouris insisted that the new score not simply reprise the first, creating for himself the challenge of covering the same territory with new ideas. While the first film's delicate love theme appears fleetingly, Poledouris establishes for the sequel its own main theme. Like the original Blue Lagoon theme, it features wide, soaring intervals, but its tone is comparatively moody and subdued, matched to the sequel's melancholy opening. The new love theme, meanwhile, is sweet and guileless. The sweeping main theme from the 1980 film is used more frequently, but still with restraint—sometimes altered melodically, or suggested through brief fragments. While the composer's palette remains mostly orchestral, synthesizer is incorporated into a number of cues and the score is a bit less Impressionistic than that of the first film, with a higher proportion of dissonance and robust adventure scoring. Ultimately, lyricism and lush atmosphere dominate, with the colors of solo winds and sweeping strings brought to the foreground. Poledouris' score for Return to the Blue Lagoon has never been available, and for this premiere release, Intrada was provided access to the complete ˝" three-channel scoring session masters as well as the live two-track session mixes on DAT.