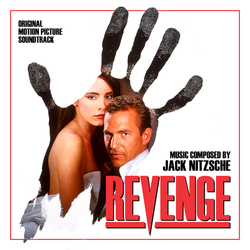 Nitzsche had been recommended to Tony Scott by producer Ray Stark. After discussing Scott's viewpoint on his film and the kind of music he had in mind, Nitzsche went off to his studio to compose the music, creating a predominantly synth-based score, centered around a beautiful love theme. Legendary guitarist Tommy Tedesco came in to play live acoustic guitar on several tracks. Live piano and guitar along with sampled pan-pipes and strings dominated the instrumental pallet along with percussion and a variety of synth tonalities.

Previously released on compact disc by Silva Screen Records at the time of the film's release, the score has become difficult to find over the years. Dragon's Domain Records is excited to bring it back into the marketplace, newly remastered by Digital Outland, along with previously unreleased music. With this remastered reissue of the score, Dragon's Domain Records are following Nitzsche's original album program that he sequenced for the 1990 Silva Screen original soundtrack release and adding several previously unreleased tracks to bring the program up to a proper CD length. A suggested listening sequence is contained in the liner notes.

This release is a limited edition release of 1000 units.