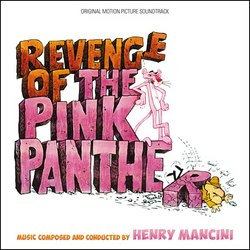 Revenge of the Pink Panther - The Complete Score

Quartet Records, in collaboration with Capitol Records and MGM, proudly presents a complete edition of Blake Edwards' Revenge of the Pink Panther, the last film featuring Peter Sellers as the clumsy Inspector Clouseau.

Naturally, the score was composed by Henry Mancini. In addition to including his iconic "Pink Panther Theme" in '70s disco style, Mancini provided more than an hour of new, original material. Full of classy melodies, the score contains two fine romantic tunes ("After the Shower" and "Simone"), a funny pop song with lyrics by Leslie Bricusse ("Move 'Em Out"), a frantic chase scene along the streets of Hong Kong, and lots of descriptive music.

The original album was released on LP by United Artist Records in 1978 and reissued on compact disc by Capitol Records in 1988. It has been out of print and very difficult to find for a long time. This album is the first-ever release of Mancini's complete score, presented in pristine stereo.