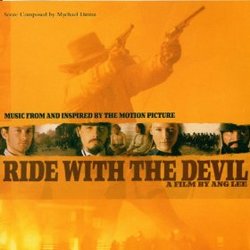 Ride with the Devil

Review: Ride With The Devil

Mychael Danna had quite the eventful year with 1999. He managed to remain a unique voice while breaking into more "mainstream" material than he'd done in the past, and all four of the scores he penned in that year were unique and interesting. The one for which he most obviously shed his typically minimalist skin in favor of a more traditional vernacular, though, was Ang Lee's Ride With the Devil.

Only given limited release, the film never really got off the ground at the box office, and so numerous copies of the score were left to warm the shelves of music retailers. It's sad that this score should fall by the wayside, because like Danna's Girl, Interrupted—his other "mainstream" score of the year—it may not be his best or most interesting work, but it's still generally pleasant, with some pretty neat action music. The "Opening Credits" introduces a rather nice theme that might have benefited from a bit more development over the rest of the score, as might most of the sub-themes. For this reason, it's the action music that's this score's real draw.

At it's best in "The Ambush" and "Backing Lawrence", the theme is driven by minimalist string eighth notes, and some really rich brass writing (note the participation of frequent Danna collaborator Nicholas Dodd, who often provides similar orchestrations for David Arnold). As for the non-Danna music on the album, most of it is traditional American folk music. It's generally tolerable, with the exception of "Old King Crow," which is laughably dreadful. The new version of Jewel's "What's Simple Is True" is quite lovely, if not all that different from the original.

Overall, the album works, and like all of Danna's releases, provides insight into the career of this ever-evolving and always interesting film composer.