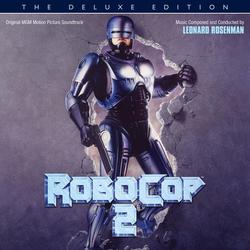 What a director/composer collaboration RoboCop 2 (1990) presented! The film was directed by none other than Irvin Kershner, and the composer was Leonard Rosenman.

The original RoboCop (1987) was, of course, scored by the legendary Basil Poledouris, but the sequel went in a very different direction.

Rosenman's music for RoboCop 2 is an epic action score and has now been expanded by more than forty minutes to make this special issue "deluxe" in every way. Newly mixed and mastered from the original elements at MGM, this is a monster restoration and we are so proud to add this score our CD Club.