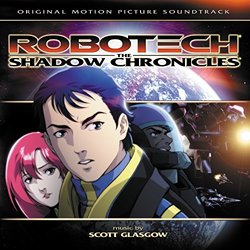 I want to put all my cards on the table here: this is not a review so much as a report, a behind-the-scenes featurette if you will. The reason for that is that Robotech: The Shadow Chronicles is something of a snafu but, like every snafu, there is an interesting (and painful) story to be told. The CD released by Varèse Sarabande is a difficult listen not because of the composition, but because it is a collage of synthetic renderings and salvageable orchestral performances, a rescue operation on what, I am told, was a nightmare. The final product is not what it should have been and must thus be treated as such. Most fans of the Robotech franchise have already expressed their unabashed praises for Glasgow\'s epic score; mainstream audiences might, however, ask themselves what it is that Varèse actually released.

After listening to Robotech and taking more than one look at the line "recorded with the City of Prague Philharmonic Orchestra" on the back cover, I was more than puzzled. The simulated quality of a majority of the cues left no doubt in my mind that this had not been recorded with a live orchestra. It was a possibility (how ever improbable) that Varèse had actually released Glasgow\'s synth mock-ups instead of the actual score. I had to ask the composer himself to figure out what had went wrong and his answer led to a lengthy email conversation in which I was brought up to speed on the nightmare that the young composer had just been through. An organization, which shall remain nameless, had been booked by the composer, offering him the chance to record with a prestigious European orchestra for a two-day remote scoring session. After last-minute delays and a near cancellation, the sessions were rescued by putting together leftover players with no other contracts. The recording session was agony, the small budget only allowing for a very limited ensemble heard in a makeshift remote studio with no acoustic isolation. Only a few cues could be recorded with the ensemble and, of those, only a subset made their way onto the final soundtrack as some were spoiled by the musicians\' inadequacies.

The multiple holes were plugged with Glasgow\'s original renderings and the more virtuosic passages, such as the tumultuous sequence in "Exodus", beyond the realm of the actual musicians, had to be brought to life via samples and synthesizers. The main title, which opens the album, was to be recorded thirteen different times and the performance chosen by Glasgow and his team is still not up to par with Hollywood orchestras. The horns display none of the brash heroism expected of a space opera score and this flaw goes on for 67 minutes.

It is thus very difficult to properly evaluate Glasgow\'s score without being constantly distracted by the mixture of orchestral and sampeld sounds. An epic, no-holds-barred musical endeavor on the scale of Robotech: The Shadow Chronicles simply cannot sound good when performed by synths and samples. Indie dramas and crime noir thrillers can get away with the sound, but space operas cannot. Rescoring Star Wars on a $5,000 budget is simply not feasible. The music itself, for what it\'s worth, was disappointing at first. A track-by-track analysis on Glasgow\'s website lists no fewer than nineteen themes, plus additional signature chords, textures, and characterizing instrumentations. Most of these melodies end up being played back to back to back and the sense of flow is lessened. Then again, the lack of subtleties in the patchy collage of themes can be partly explained by the performances themselves: a real orchestra provides a depth of sound that, in and of itself, creates a sense of flow even during a constant thematic assault. The sound here, especially during the action sequences, is flat and is not kind to the barrage of leitmotives.

It is only on my fourth listen of the album that I began to hear it the way it was meant to be as opposed to the way it came out. It made me realize just how crucial performance is in the appreciation of music: the synthetic woodwinds whirling about in the action sequences made these sequences sound trivial when, in fact, the music on its own was quite good. It helps to have composed music for fun with extremely limited resources, clicking away on an outdated version of Cakewalk Pro Audio and hearing the strings and brass played through a bad MIDI card. You never hear the performance; you hear what a symphony orchestra would sound like playing these notes. Going beyond the sometimes inadequate performances on Robotech, one hears the actual melodies, accompaniments, textures, and rhythms and it is quite impressive. The thematic material is heavy but effective. Glasgow found inspiration in more than one composer: John Williams ("Ariel"), Gustav Holst ("The Icarus"), Charles Ives ("The Hybrid"), Arthur Honnegger ("The Nichols Maneuver"), Bear McCreary ("The Battle Begins"), and a few others. The Wagnerian leitmotif technique that revolutionized cinema in Star Wars is clearly the starting point, but Glasgow integrates so many sounds and techniques as to make Robotech almost original. Moreover, instruments such as the zorna, the serpent, and Hawaiian drums, which provide the musical "voice" of the Invid, are all live and color Robotech in very interesting and rarely heard shades of exoticism.

Scott Glasgow\'s words reveal a young man passionate for film and Classical music. The track-by-track analysis he wrote for his website shows a proud artist who can barely believe his career dream has come true and who cannot wait to reveal all the tricks and thoughtful details of his latest endeavor, much like a novice magician. His score to Chasing Ghosts impressed me with its maturity and complexity and there was no doubt in my mind when I wrote the review that "he is another young composer to watch out for". He needs to be given the opportunity to work on a bigger budget with a more competent ensemble. Chasing Ghosts proves he has the mastery of the language; Robotech: The Shadow Chronicles shows he has the passion for it. He still has to learn a few more tricks before he can be compared to the likes of John Williams in the space opera arena: epics like Star Wars and The Lord of the Rings require of a composer either an amazing amount of experience or an unnatural dose of talent (usually both). Varèse\'s release of Robotech will probably satisfy fans of the movie who have voiced their enthusiasm for it; for the mainstream film score fan, the varying quality of the sound might prove off-putting even if the music itself can be impressive. There is, however, no denying Glasgow\'s sheer passion and zeal for the genre of large scale science fiction dramas.