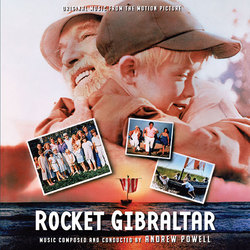 For the 1988 Columbia Pictures' film Rocket Gibraltar, English composer, arranger, and performer Andrew Powell composed the heartfelt score. Powell chose parts specific to the story's dramatic weave: Levi, the grandchildren, Cy Blue, and the titular skiff, Rocket Gibraltar. The music takes the listener through a sonic journey—with elements of classicism, pop, a little blues, and a bit of sturdy orchestral dissonance. These diverse musical styles help to characterize Levi's various family members and give the film a unique mélange of sonic flavorings. Powell 's score avoids sentimentality by conveying the earnestness that allows what is in fact a pretty ghastly denouement to succeed as a loving gift in honor of the family patriarch.

Produced by Andrew Powell, Intrada is proud to release this score on its 30th anniversary. The project was spearheaded by Peter Hackman, who's passion for this score started when he first saw the film as a child, driving him for 30 years to make sure this score was released on its own for all to hear.