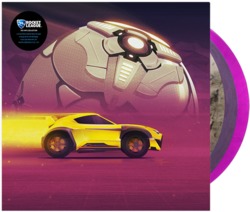 In concert with the one-year anniversary of Rocket League, developer Psyonix Studios and iam8bit are bringing the thumpin', bumpin', grindin', blindin' beats of the game's soundtrack to vinyl.

Featuring over 22 full-throttle and totally vibey tracks across three discs, the vinyl collection comprises both Volumes 1 and 2 of the digital soundtracks—making this a catch-all delight. Words are so passé because you've already played the game, so you know damn well that these tunes are as welcoming and infectious as it gets!

Artist Dan Bronsema translated the intense, hybrid-action energy of Rocket League to an album design—no easy task—but his art provides a fun, colorful snapshot of the chaos on the field.