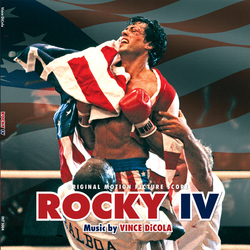 The 1985 sequel Rocky IV marked a new rhythm for the series, one that matched the glossy look and tightly-edited feel of the rock videos that were in vogue on MTV. This new tone would see Bill Conti's traditional orchestral approach replaced by the driving, synth-heavy score of Vince DiCola. Rocky IV would become DiCola's first full-fledged composing assignment and yet he didn't go so far as to reinvent the symphonic style Conti had established. DiCola developed the major musical conflict in his score—between the cold, Terminator-like electronics for Ivan Drago, and the warm, sympathetic orchestra of Rocky Balboa. Familiar themes weave in and out of a new soundscape for Rocky IV, giving a new face to an old friend and providing a new, thrilling, aural experience. Just as Rocky Balboa was evolving over the course of the films, so was the music.

While a song album was released at the time of the film and did feature several minutes of the DiCola score, Intrada presents the complete Rocky IV score from the complete stereo session elements.