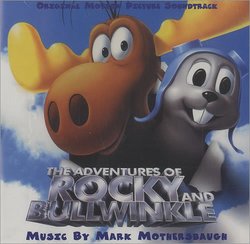 Arguably one of the worst films of 2000, Rocky and Bullwinkle will forever remain in my mind a waste of film, right up there with Battlefield Earth and Coyote Ugly. Sure each of those films had some enjoyable moments, but Battlefield Earth didn't have Piper Perabo. In any case, for all the trouble they went through (technically) to make Rocky and Bullwinkle, it's nice to know that in the end, composer Mark Mothersbaugh probably had a great time working on the film, as evident through his exciting and energetic score.

As expected, Frank Comstock's "Rocky: The Flying Squirrel" theme makes numerous appearances through the score, which at it's heart is a classic animated cartoon score with a huge orchestra and doses of drama to boot. The first track, "Logo and Opening Titles" is less than a minute long, but gives you a quick overview of most of the themes you'll hear in the film. The high-energy guitar solo in "Rocky: The Flying Squirrel" is a great homage to this classic theme. "From Pottsylvania To Hollywood" contains a nice arrangement of "Hooray for Hollywood", and then goes into full film-drama overdrive with "The Green Light". Choir, swelling orchestra, and heralding French horns tell us that this is the key moment in the film (at least for the next 2 minutes). It sounds like something big and grandiose, and doesn't fit the storyline (which is so ludicrous anyways), so it works perfectly as comedy.

Our first hint of Boris and Natasha's theme comes in "On The Highway / The Test Machine", but is fully realized later on in "Fearless Leader / Boris Badenov", which also has a bit of a surfer edge to it in the last half. "Zombie Drone" is a dark and evil cue that segues into a Mothersbaugh arrangement of "Secret Agent Man" - but it cuts out quickly, leaving the listener in a bit of a lurch. A sneaky motif for Boris and Natasha ("Boris and Natasha", "Implausibly Coincidental") is reminiscent of Silvestri's work on Mousehunt, and does a fine job adding the right level of sneakiness to the score. "Zombified People / Big Action" is, well, a big action cue. Plenty of themes pop in throughout this cue, which is high on energy and excitement.

As you would expect, this is basically a live action cartoon (with two cartoon characters) so the music is very heavy on the mickey-mousing. But the themes are there, and it's a highly enjoyable score. Two songs are also included - "Hail, Hail Pottsylvania" (from the original cartoon) and "Through The Eyes Of A Child", an original song for the film. Running almost 40-minutes long, and available through Super Collector (http://www.supercollector.com/), this album is definitely one to get. But by all means, please be sure to avoid the film at all costs!