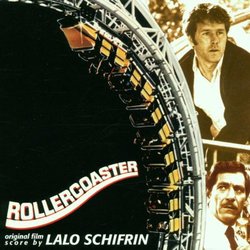 Now why would anyone rush out to see Star Wars in the summer of 1977 when they could go see Rollercoaster? With a madman on the loose trying to blow up various amusement park rides around the nation, with a government task force after him and a dedicated safety inspector (George Segal), why would anyone want to see the rebellion against the empire? Seriously, Rollercoaster was a very cheesy film, and it even featured Henry Fonda in a small role, and an even smaller role by a very young Helen Hunt. While it might not provide the right level of excitement to today's MTV-oriented ADD-suffering audience, I found the film to have it's share of moments. Musically, it provided a rather riveting soundtrack that blended the styles of the day with jazzy film scoring. No, I'm not referring to the abhorrent 10-minute sequence in the film with background music by the "band" Sparks; I'm referring to Lalo Schifrin's apropos (if not somewhat eclectic) underscore.

"Prologye, Montage" gives you a good overall feel for the score - it showcases all of the different styles, from tense strings to smooth jazz to (dated) disco beats. The smooth jazz is a trademark of Lalo's style, and comes through wonderfully in "Portrait of Harry" and "Another Side of Harry". The disco beats are featured in "Rollercoaster" and "Merry-Go-Round". It's cheesy and fun, and you can't help but like it. The tense string motif in "Reflections in the Window" and "Persistence" certainly adds to the tension, but got a bit repetitive after a while.

One of the highlight tracks is "Calliope of Death", which features a circus-like calliope with ominous strings. It reminded me a bit of the work Schifrin did on The Amityville Horror, and is a great mood-setter for the film. Another great cue is the "Young Man's Theme", also known as "Movement from String Quartette" - it opens the film as a source cue, and before you know it, it's moved into the tense string motif mentioned above. It adds a slight touch of class, believe it or not! Speaking of source cues, "Penny Arcade" and "Cotton Candy" are two examples of cues that feature sound effects and background dialogue. It's not a bad thing, it adds to the atmosphere of the album. An interesting inclusion is "Apple Turnover", a big-band jazzy number that runs almost four minutes - but is featured for less than four seconds in the final film. (It's the radio alarm clock that goes off - and is immediately silenced!)

Released through Lalo's personal label, Aleph Records, Rollercoaster already has my current bid for "Guilty Pleasure Score of the Year". Of course, it's only February. But unless someone releases the score to Frogs, this one might be a winner! (Just kidding about Frogs - I haven't seen it yet.) Fortunately for us, Schifrin was able to clear the rights to the original soundtrack recording for the film, as opposed to going to the expense of doing a new recording. You don't necessarily have to have seen the film to enjoy this score - so go get it!