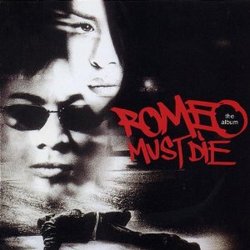 In my opinion, the soundtrack to Romeo Must Die is mixed. There are a few good tracks, but the CD I listened to contained fluff; songs picked for this album were mostly unimaginative and repetitive. Furthermore, I received an expurgated version of the CD. If I'm going to listen to profanity-laden tracks, I would like to hear the profanity. With half-second cuts in the vocals every few seconds on some tracks, I found myself irritated.

In any case, I found a few gems in this collection of castoffs and B-sides. Aaliyah generally is the best of the album. I often hear her title song to the soundtrack, Try Again, on 92.3 FM, the local "home for hip-hop and R&B." DMX's unique styling adds grit to another Aaliyah song, Come Back in One Piece. Aaliyah rescues the formulaic Are You Feelin Me? with her voice. It Really Don't Matter samples driving riffs that support Confidential's hard lyrics. Dave Bing's Somebody Gonna Die Tonight doesn't necessarily have phat (ahem) beats, but has the most sobering lyrics: "Somebody gonna ride tonight / somebody gonna die tonight / somebody's mom gonna cry tonight / 'cause it's murder." It's difficult not to sit up and pay attention when this song plays.

There are a few tracks I find amusing, not because of any innate qualities, but because they seem to belong to earlier phases of rap. For example, I found myself nodding my head in agreement with the beats of Playa's Woozy, carried by its New Jack Swing harmonizing. Another retro-sounding piece was Chante Moore's This is a Test. Comparing this song with some lesser-known En Vogue tunes I found, I could not discern a difference. Finally, Revival by Kim & Melody reminded me of several unnamed rappers to emerge with one-hit wonders in the late 80's and early nineties. To be more specific, Revival has very simple and cheap drum beats (think Charlie Mack - First Out the Limo by DJ Jazzy Jeff and The Fresh Prince). The female MCs that are doing their thing struggle to rap in time with the beats. Though advisedly cheesy, this song brought me back to the sixth grade. In specific, it reminds me of a video I saw on MTV with black lights and people dancing to the lyrics of a female MC. (What was the name of that song? Something with "sister" in it? Send me email.)

The other tracks are too insignificant to mention. Even the presence of Destiny's Child, a cross-over group (read: suburbanites like 'em), doesn't help the disc any. I've heard, and liked, Mack 10 before, but in this case his Thugz sounded like a poor man's Tupac. Find me a soundtrack with KRS-One, and I'll give it five stars. I'll even wax reminiscent for Tupac's I Get Around. But as for this soundtrack, I must give it a mere two stars out of five. Peace out, yo.