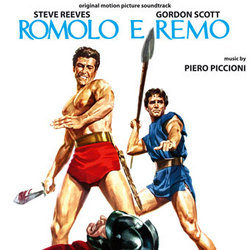 Digitmovies continues its journey into the world of Italian Peplum films, by releasing the complete OST by Piero Piccioni from the film Duel of the Titans (Romolo e Remo, as volume XXXI.

For our CD we were able to access the mono master tapes from the original recording session and the first generation master tape assembled by the author for a vinyl record (obviously without the Dolby Surround Sound filter). We discovered previously unreleased music that makes this new edition CD 73:25 minutes long. Piccioni composed a recurring battle theme emphasizing French horns for the two protagonists. This theme alternates with very dramatic war songs having an ethnic pastoral theme for the wolf scene and a mystical theme for the soldiers at the spring.