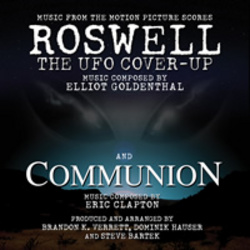 The music for Roswell provided a documentary-like musical backdrop to the film; its claustrophobic, dissonant resonance is provided not for the suspicion of alien encounters but for the government machine itself and its need to suppress those encounters from the public.

For the 1989 thriller Communion, Clapton's music serves to reflect the personality of Streiber as he is affected by his ongoing experiences with the extra-terrestrials.