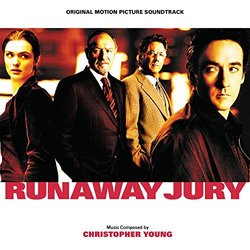 Remember over a decade ago when Grisham films were all the rage? All you needed was a straight-forward adaptation of a best-seller of his, and you would have an instant blockbuster. Now you can't even make one with Dustin Hoffman, Gene Hackman and John Cusack and have it be a hit! But thus is the course of changing tastes.

It feels sloppy to say the same thing two reviews in a row, but if Thomas Newman were to copyright his style, he would be getting plenty of royalty checks right now.

Christopher Young uses Newman's quirky instrumentation throughout the entire score (specifically The Player, Pay It Forward and Erin Brokovich). The electric keyboard used so prominently in Erin Brokovich  pops up in over half a dozen tracks like "Split Whiskey" and "The Devil's Not Such A Bad Guy After All" If one were to score for mimicry, then this would get a high rating. In fact, I bet you could take tracks like "Cheaper By The Dozen" and "Jury For Sale:" and cut them into one of those other scores with no one noticing. And at other times, some tracks (the middle of "Fayeth In Fate No More") sounds like one of Newman's 80's scores like Heathers). Not only that, the tracks have the witty track titles that Newman's album's often have.

Occasionally,  Christopher Young's thriller style pops out ("Not Lady Liberty" and "Shark Tactics") but these moments are so brief and out of place in context.  Not that the rest of the music has any clear development.