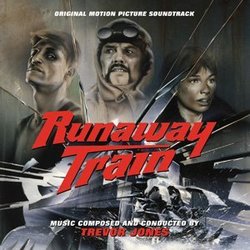 Presenting the original motion picture score to the acclaimed 1985 dramatic thriller Runaway Train, starring Jon Voight, Eric Roberts and Rebecca De Mornay and directed by Andrei Konchalovsky and based on a screenplay by Akira Kurosawa.

Composer Trevor Jones (The Dark Crystal) effectively enhances this story of escaped convicts on a runaway locomotive with a unique brew of electronic sounds and rhythms. Remastered from MGM vault elements, this special Limited Edition release produced by Ford Thaxton presents the original album version of the score, as well as the premiere release of the film score itself, which includes the previously unreleased film version of "Gloria in D Major – Et in Terra Pax," from the movie's finale.

CD Booklet features exclusive liner notes. This is a limited edition of 3,000 units.