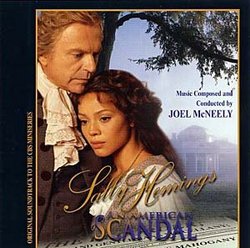 For the television miniseries "Sally Hemings: An American Scandal", one would expect a score befitting the era, with plenty of sweeping moments of drama, sentimentality and, of course, romance. Sam Neill plays Thomas Jefferson, with Carmen Ejogo as his slave who he (as we now know) had an intimate relationship with. Hired to compose the score, with a mere five weeks to write it, was composer Joel McNeely. McNeely has proven his abilities in almost every film genre, and "Sally Hemings" is the first film (to the best of my recollection) that lent him the opportunity to score an early Americana period drama.

The main title cue, "I Was Born Sally Hemings", is a soft dramatic piece that begins with a female vocalist quietly singing, and it segues smoothly into the main theme from the film. This theme is very lyrical by nature, and the traditional - almost John Williams stylistic approach to the orchestration works perfectly for setting the score into the time period. Many of the cues on the album feel traditional grounded - it is almost as if the classical composers of that era were being themselves evoked to lend their talents to the score.

Some of the cues, in fact, do integrate some classical pieces by Beethoven and Corelli. But the flow of the score from McNeely's work, to these classic works, never feels disjointed or awkward. The bulk of the score is rather soft underscore, and there are moments where McNeely chooses to use only a few instruments to make his point - after all, just because you have a full orchestra doesn't mean you have to use them all of the time! This approach results in a delightful mixture of full orchestral cues, with cues that consist of merely a piano, a flute, and a violin.

McNeely ended up writing over two hours of music in those five weeks, including some natural disasters that hampered the scoring process in Seattle. But the resulting score was one that, with its strong theme, ended up being a successful period score. I can only hope that McNeely continues to choose projects that allow him to show off his diverse ability to score almost any type of genre. "Sally Hemings: An American Scandal" has been released by Prometheus Records, and can be purchased through Soundtrack Magazine at http://www.soundtrackmag.com/ as well as other soundtrack mail order outlets.