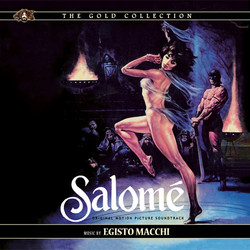 Kronos Records is proud to release for the first time ever in CD format the soundtrack for Salome the 1986 Italian-French drama film.

The music was composed and conducted by the great Italian composer Egisto Macchi who wrote a very diverse score, ranging from orchestral dramatic and avantegardistic pieces, to synthesizer ones verging on the ambient. Prepare to be taken away to the unique musical world of this truly unique composer.

A LP containing a selection of cues from the score was released back in 1986, now on our limited edition 2CD set is the music as presented on the 1986 CAM LP and all the music that was previous unreleased. Over 2 hours of music in our 25th GOLD title and globally our 100th release.