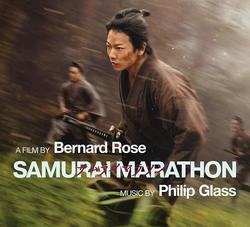 Orange Mountain Music presents the soundtrack to Bernard Rose's new film Samurai Marathon. The soundtrack is comprised of short excerpts of Philip Glass' music including music from Mishima, movements from Symphonies 2,3 and 8, Violin Concerto No.1, The Fog of War, Naqoyqatsi and the operas Akhnaten and Satyagraha. These are new recordings of the music performed by the The City of Prague Philharmonic under the baton of Richard Hein.