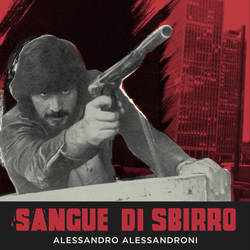 Perhaps not everyone knows that Alessandro Alessandroni, the Master of Italian library music, had also composed several original soundtracks from late '60s to early '80s, especially for many "genre" movies such as poliziotteschi, sexy comedies, spaghetti western, horror and thriller. Among them, Sangue di sbirro, is certainly one of the most prestigious works made for Italian cinema in the 70s: an Italian noir set in Philadelphia, where the jazz-funk library's background of the Maestro meets deep soul & black music. An obstinate rhythm which opens to jazz, funk and disco, with moments of pure easy listening (Tema di Susie is one of the best Alessandroni's film themes). Sounds and arrangements typical of blaxploitation (including an original reinterpretation of Shaft's theme) but with a proudly Italian's touch.

As always, many excellent soloists were involved in the recording session, including a young Enrico Pieranunzi on Fender Rhodes, Dino Piana on trombone and Silvano Chimenti on the electric guitar. A five stars soundtrack for the first time ever on your turntable.