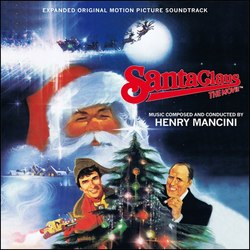 The composer was deeply involved in the production, composing more than 85 minutes of original music for the 109-minute film. This soundtrack is surely one of the biggest efforts of his career.

Mancini' score is so beautiful, diverse and emotional, it is not strange that it has become the film's most remembered and appreciated feature. Recorded in CTS Studios in London with The London Metropolitan Orchestra, the score also features The Ambrosian Children's Choir performing several charming songs written by Mancini and Leslie Bricusse.

For the original album, released in 1985 by EMI America, Mancini and sound engineer Rod McMaster prepared a program of highlights: 13 tracks lasting only 37 minutes (from an 85-minute score!). Some themes were modified for their album version – with different durations, slightly different mixes or the addition of pop elements. Almost all of Mancini's symphonic effort was missing.

After a long search for all the source material and an effort to bring together the different rights owners (the film was a complicated coproduction), we can now present Mancini's masterful score in its entirety, remixed from 2″ 24-track and 1/2" 3-track stereo session masters vaulted in mint condition in Abbey Road Studios, London (where McMaster mixed the EMI disc). In addition to the complete score, it has been great to discover a lot of extra material that Mancini recorded for the film: songs with alternate lyrics, different orchestrations, etc.