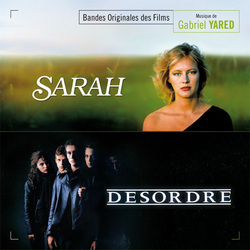 Music Box Records is pleased to present on the same album two original motion picture soundtracks composed by Gabriel Yared and mostly unreleased on CD: Sarah (1983) and Desordre (1986). These two scores show Yared's interest in innovative ambiances and sound in his early years of film composing.

For Sarah, he composed his score around the second movement of Robert Schumann's Piano Quintet in E-flat major, Op. 44 with its numerous variations. L'anniversaire is Sarah's other great theme, associated with the character of Gabrielle Lazure. This theme starts out as a little romantic ballad, then becomes coloured with jazz influences. Other pieces are a very well balanced mix of a string orchestra and synthetic sounds which envelop the film in the fantastic.

For Desordre, Yared composed his score in a classical vein, dominated by cello. The music becomes the internal voice of the characters, expressing their feelings.