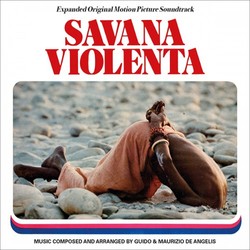 Quartet Records and Gruppo Sugar presents an expanded and remastered CD of memorable mondo mayhem with music by Guido and Maurizio de Angelis.

Based on originally shot material and outtakes from the Ultime Grida Dalla Savana, the follow-up entitled Savana Violenta (1976) is a more light-hearted and less-focused mondo film that discusses even more facets of the relationship between humans and animals - with a few shocking examples thrown in for good measure.

A 40-minute LP of the soundtrack was released on CAM in 1976 and reissued later in CD by the same company (paired with the predecessor Ultime grida dalla Savana). For this premiere complete edition, we have included the remastered album program, and also another 37 minutes of previously unreleased tracks. Produced by Claudio Fuiano, the richly illustrated booklet includes liner notes by Gergely Hubai discussing the film, the composers and the score.