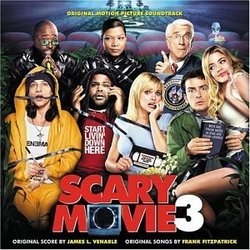 What does this album want to be? There's not enough music to be a good rap soundtrack. There's not even enough score to be of interest to film music collectors. It just exists as a poorly thought out soundtrack release. Oddly enough, I feel this movie series has improved with each sequel (starting at bad and slowly getting watchable). Now that one of the original masters of blitzkrieg comedy is directing this installment (David Zucker) instead of the Wayans Brothers. With all the changes, it still overall an urban album.

The songs are in on a light bouncy tone. None of them are particularly bad, but not many are particular good. There's several fun tracks: Gage's "Who U Lookin' At" and Kebyar's "Smoke It Up", with a cool loop sampled from Beethoven's 5th Symphony.

The talented up-and-coming composer James L. Venable's score is presented in two tracks at the end of the album, but it's a hodge-podge of short cues edited together. When is there going to be a good score album of his work on either the Powerpuff Girls TV show or movie?

There's also a series of obnoxious interstitials with Kevin Hart doing some painfully unfunny shtick over Venable's score. It just shows in the end the carelessness in which the album was put together.